How to Voice Text on iPhone

Voice Texts are a cool new feature introduced in iOS 8 which allows you to send small audio notes from your iPhone to another iOS or Mac device that supports iMessages. Quicker to compose, more fun, and in many ways more convenient than traditional text messages, voice texts offer you a fast and more personal way to keep in touch with friends and family. Because they are a new feature, voice texts may seem a bit confusing at first, but  in this easy guide you’ll learn how to voice text on iPhone in no time. 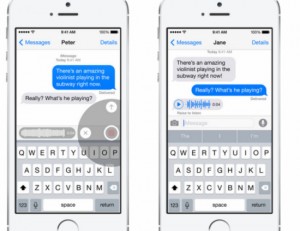 Any voice texts you send will appear in the message thread window, where they will be playable by both you and the recipient until they expire. By default, iOS auto-deletes audio and video messages to save space on your device, but you can change the audio note expiration setting in your device’s Settings, or disable auto-delete altogether.

Now that you know how to voice text on iPhone, you can send your family and friends audio notes that are more personal than text messages, and that are also easier to compose on the go.

Keep in mind that voice texts have been introduced only in iOS 8. Earlier iOS versions lack audio texting support, though you can use Siri to dictate standard text messages.