The iPod Touch has become very famous because of its great media friendly features and its ability to install apps from the Apple Store. How many of you have the iPod Touch and have never tried cool apps on it? I bet there won’t be a single one.

The apps at the Apple Store range from eBook readers and informational tools to networking apps and games. There are thousands of apps available for free while a few cost a dollar or so. 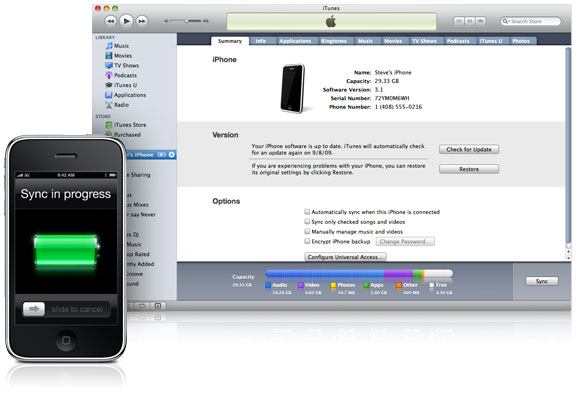 In contrast to traditional programs, the apps that you download from the App Store cannot be run on computers. They function only on devices such as iPod Touch which run the iOS. This means you should know how to sync your apps to the iPod Touch.

1. The first thing you need to do when you want an app on your Touch is to find the app. For this, you need to go to the iTunes Store and access the App Store which is a part of it. So start up the iTunes program on your iOS device or computer, and tap or click on the tab related to the App Store.

2. Once you’ve entered the store, look for or browse the app you need. You’ll need to get an iTunes account before you can download it. It’s a free account and takes just a few minutes to create. All downloaded apps are automatically added to your personal iTunes library. To view the available apps in the library, click the Apps menu in the tray on the left.

3. If you’ve not made any changes to the default settings, iTunes will automatically sync the new apps to your iPod Touch when you sync. If you’ve made some setting changes, you simply need to click in the box near the app you wish to sync.

So when you wish to add some new apps to your iPod Touch, you need to sync your device to your computer to install the app and get it ready for use. Note that this process will not work for apps that aren’t approved by Apple.

There’s another App Store that can be accessed via a program named Cydia. Apps from here can be used by jailbreaking your device. This allows the use of unapproved software to be used on the iPod. But be careful as it may cause major problems on the iPod Touch which might need all the existing data to be removed. The apps may contain malware and you need to be really careful before installing them.