How to Remove Apps On iPad

Whether you want to de-clutter your screens or free up some HD space, removing apps on the iPad is a quick and easy process that doesn’t even require you to plug your device into iTunes. Below you’ll find out how to remove apps on iPad directly from your device. 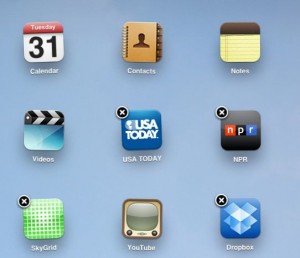 Reinstalling deleted apps later on is easy. Go to the App Store, locate the app, and tap Install. If the app is not free, you will be able to install it without having to pay for it again.

Not all apps on your iPad can be removed. Native iOS apps like Safari, Notes, iTunes, or Calendar cannot be deleted – the X sign won’t appear for them. You can, however, chose to hide these apps from display to save up screen space.

The apps will disappear from your home screen but will remain on your device. You will be able to reactivate them at a later time.

Knowing how to remove apps on iPad will make it easier for you to keep your tablet organized and to save up disk space.