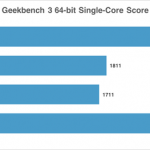 Apple’s super-sized iPad Pro is indeed a powerful device. With a performance that matches its respectable size, iPad Pro is the fastest iPad yet. You may not replace your traditional PC right away, but this huge tablet could surely pull it off. So how good is iPad Pro? To measure the performance of the newly-released iPad, various iPad Pro benchmark tests were conducted. The tech site Ars Technica revealed the fascinating results in its extensive review of the iPad. Several benchmark apps were used in the process such as GeekBench 3 and TabletMark to test the speed, 3DMark for graphics performance, as well as several browser-based tests.

iPad Pro benchmark results indicate an extraordinary performance, mostly thanks to the Apple A9X chip. There’s no doubt now that iPad Pro can beat any iOS device. Here are some results to the iPad benchmark tests:

The A9X chip used by iPad Pro is far superior to the previous A8X chip, which helps the iPad work at a stunning speed. This is reflected by the Geekbench 3 Multi-Core test results which show that iPad Pro is 27% faster than the iPad Air 2 (with an A8X processor) and 78% faster than iPad mini 4. The Geekbench 3 Single-Core test results are even more impressive revealing that iPad Pro performs almost twice as fast as the iPad Air and iPad mini.

According to the TabletMark test results, iPad Pro has a speed of up to 24% faster than iPad Air 2 and 29% over the iPad mini 4.

When it comes to graphics, iPad Pro manages to stay on top again and outperform iPad Air 2 and iPad mini 4 in terms of fluidness and speed. No one can deny that the A9X wonder-chip is better than anything currently available in a computer.

We hope you found our article on iPad benchmark informative. For a full description of the test results, you can visit Ars Technica’s detailed review of iPad Pro.