iPhone 5 Overheating Problems – Is Your Device Too Hot to Hold?

Old iPhone models have occasionally suffered from overheating issues, but it seems that iPhone 5 is Apple’s ‘hottest’ product so far. There are many complaints from users from all over the world who experience iPhone 5 overheating problems, and while usually these problems don’t cause damage to the device’s components, they can be quite annoying. 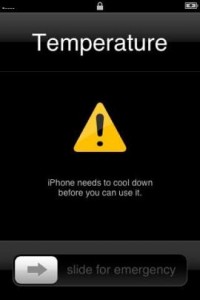 It’s quite simple. The back of the device becomes uncomfortably hot, quickly reaching around 95 degrees Fahrenheit after half an hour or more of normal usage. The area that is hottest is the strip just under the camera. Using apps that are processor-intensive quickly rises the temperature of the device, so much so sometimes that you cannot hold it in your hands anymore.

Other symptoms of an overheated iPhone include an alert message that the device needs to cool down, a black screen, weak cellular signals, and charging not working.

iPhone 5 overheating problems are more likely to arise if you use the device in a region with hot weather, while exposing it directly to the heat of the sun or to that of a heater. Sometimes overheating can arise only when using certain apps or features, especially those that put a strain on the processor.

What to Do With an Overheated iPhone 5

Regardless of the cause why your device is overheating, you will want to turn off your hot iPhone 5 and put in a cool place – not the freezer – for at least half an hour and see what happens. Usually the heat should go away and you’ll be able to use the device again. If you suspect that a particular app causes the heating, you will want to stop using that and remove it from you device.

If iPhone 5 overheating problems persist, and you can’t attribute them on the weather or on your excessive usage patterns, then something is clearly wrong with your device and you should contact the nearest Apple support center, which will either fix or replace your model, if you still have warranty for it. What you really don’t want to do with a device that keeps overheating is attempt to recharge it.