Is it really true that the Korean giant was this time to beat the numbers of our most delicious fruit? Well let us look at the numbers; Samsung has recently prepared a nice introduction event for Galaxy S4. Samsung’s youtube channel hast broadcasted the event all over the world, and then this event caused a record breaking pre-order for the first 48 hours period. Samsung has its own record but how are competitors? According to the survey which is made by Investing Analytics, many people interested in Galaxy S4, but this interest level was very low compared to Apple’s iPhone 5. Maybe it was because of the pre-order price tag of $250 compared to $200 of iPhone’s. 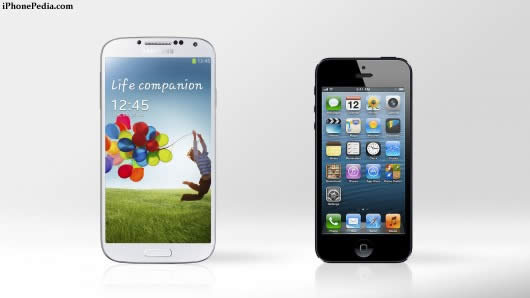 If you remember the iPhone 5’s launch, which was in September 2012, has broken the record by selling 5 million phones at its first weekend. When we look at the twitter interest of iPhone 5 and Galaxy s4, the iPhone 5 has around 2.5 million tweets for the first day, but when we look at the s4, the tweets were as low as 440 thousand. Apart from these numbers, the hardware side of S4 is stronger than iPhone 5 for sure, but what will happen to the S4 when iPhone 6 will be released remains a mystery. So once again we can say that the Apple is victorious.