Though most of what can be expected in terms of new iOS 7 features will not be fully known until it is released sometime this fall, Apple is being fairly forthcoming about the expectations for the new OS, and seems to think iPhone and iPad users have reason to be excited. iOS 7 is slated to be the most groundbreaking update that Apple has released in a while, and should help it keep pace with some of the more innovative features of its chief competitor, Android. 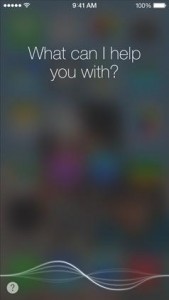 First of all, one of the most talked about new iOS 7 features is going to be the new-and-improved Siri, Apple’s voice-recognition software. Siri was much-hyped after Apple purchased it from developer Siri, Inc. in 2010, and was almost the single most important selling point of the iPhone 4s, the first phone to have it included. However great it was in concept, however, and in the catchy commercials, it failed to perform quite as admirably in the real world. It still managed to have quite a few snafus with voice recognition, particularly when there were multiple languages or accents involved. Meanwhile Android’s voice-recognition was actually quire remarkably good, and though it failed to be as broad reaching as Siri in terms of where in the phone it was applicable, it nevertheless worked well when it was. Supposedly Apple has completely revamped Siri, and she (or he now, believe it or not) is going to be ready to guide you around the phone once again.

The finger and hand motions that Apple pioneered for touch screen interfaces are a large reason for the success of iPads and iPhones, and for the first time in a while it seems Apple has a fresh set of them available in the new iOS 7 features. Users will now have some new swipe capabilities for minimizing windows, nesting activities, and turning apps off.

A few of the new iOS 7 features, however, feel like playing catch-up. For instance, iTunes Radio, a new feature of iTunes, is a competitor to Spotify and Pandora. Head movement recognition, the control center swipe functions, and nearby device sharing, all new additions to the capabilities of the iPhone, are also all functions that Android phones have had in place for at least one model, if not for several years. And the “Filters” function on the camera is obviously an attempt to capitalize on the success of Instagram. Nevertheless, whether Apple invented all of them or not, the new iOS 7 features stand to make the iPhone a pretty cutting-edge device, capable of doing almost anything.