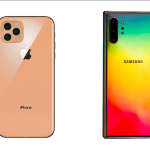 Every year, launch of two mobile products, become talk of town, offices, universities/schools and gyms. The choice affects the reputation, status and image of a person greatly – because we are a tech society now!

It is likely that Tim Cook, Apple’s CEO, will reveal a brand new iPhone in less than two months from now on. Whole lot of new features of iPhone 11 in 2019 model are its display, upgraded camera, iOS 13 and many other special features which simply make it one of the best handsets.

The rumored battle of comparison and differentiation is obvious between Note 10 and iPhone 11, and we are doing same here.

Which one is better between Samsung Galaxy Note 10 or iPhone 11?

After going through this thorough comparison between Samsung Galaxy 10 and iPhone 11, it should be clear that Samsung Galaxy Note 10 is no way inferior to iPhone 11, and vice versa. Both have their own individual best and smart features, which give them the higher and unique place in the market that they have attained.

So, what will you choose between Samsung Galaxy Note 10 and iPhone 11? We bet it is a tough decision.