For people who are living in the past and want to remember everything, iPhone’s new app called Heard is a great find. This new app is also called “the iPhone Time Machine“. It records all the sounds it hears using the mic of the iPhone and saves the last 5 minutes in its memory. 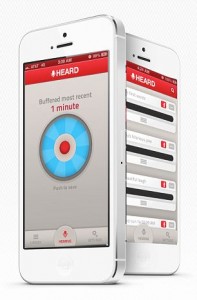 Once something important is recorded the user can highlight the section they want to store. It’s easy to do and many people find the app very useful. Once these short snippets are saved, they can easily be shared on Twitter, Facebook and other social media websites. These messages can also be emailed to friends and family who could also benefit from the info in that message.

However, if you don’t do anything for five minutes after hearing something important, you can’t get it back. When more time goes by, everything is automatically deleted from the memory of the iPhone.

When you think about it, Heard works quite like Digital video recorders such as TiVo. While it won’t save video, it does the same with sound. Although, you won’t be recording your TV, you will be recording your conversations and memos etc.

When you start the app, it will work in the background for as long as you switch it off. For your reminder, there is a banner on the screen informing you that you are being recorded.

There are some people who like to write down or record everything they do and inform others – who doesn’t know about Kim Kardashian and her Twitter-streak! Anybody from celebs to businessmen and students can use Heard to create reports.

The app doesn’t make any sounds and it won’t slow down your iPhone or interfere with phone calls. Instead, you can catch all the jokes, useful info, laughter and instructions without having to write them down or specifically recording them.