Original Apple accessories have a reputation for being rather costly. Okay, they might not always be expensive, but they’re certainly not cheap, and considering their excellent quality, that’s understandable. There are users, however, who are willing to make compromises when it comes to iPad or iPhone or iPod accessories and purchase second-rate products made in China but not designed in California. Naturally, most of those users live in countries where the average income is much lower than it is in the United States. 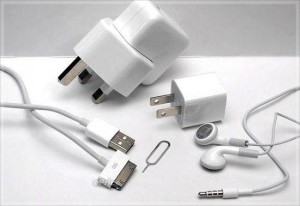 The problem with these second-rate products is that they can be dangerous. There have been quite a few recorded cases of chargers that exploded or electrocuted users, injuring or even killing them. The latest casualty of counterfeit iPhone chargers are the 23-year-old Ma Ailun from China, who died, and her friend Wu Jian, who suffered a comma after his charger shocked him into a cardiac arrest. These accidents don’t happen only in China, but all over the globe, even in the US.

Counterfeit iPhone chargers are sold for just a few dollars, while the original ones are around $20. A hefty sum, you might think, for a tiny little thing that doesn’t do anything but charge a device. But a charger is quite an impressive piece of technology; converting line AC into 5 volt DC output is not an easy task.

The difference between original Apple chargers and counterfeit Apple charger usually lies in the integrated circuit that runs the charger, as well as in the safety overrides that prevent short circuits, which the counterfeit products usually lack. In other words, makers of counterfeit iPhone chargers remove the safety components to cut costs dramatically and offer cheaper products.

Whether or not Apple sells overpriced chargers is another matter. Samsung chargers, for example, cost no more than $10, and experts say that there’s not much difference in terms of components between them and those sold by Apple. Anyway, the fact is that counterfeit iPhone chargers are a big danger, and they should be avoided. If you’ve already payed a few hundred dollars on your iPhone, there’s no point in trying to save money by buying a counterfeit charger. But the original thing. And to make sure that you don’t but a fake charger without your knowledge, always shop at a certified Apple retailer.