What is Retina Display

Apple has been known to come up with a wide array of technology and innovation through the years. They were one of the first companies to make a personal computer that was accepted and purchased by the masses, and they were the creators of the enormously popular iPod, iPad and iPhone devices. Apple has recently unveiled their Retina Display on a select number of devices. A retina display is in theory one in which the user can notice no pixilation of an image at a given distance.

What is Retina Display?


While the science behind the retina display can cause anybody’s brain to hurt, the basic premise is a display that incorporates so many small pixels that the human eye cannot distinguish between individual pixels, like most people can do on a television screen or computer monitor. Apple accomplished this by creating LCD screens with extremely high PPI (pixels per inch) numbers. The iPhone 4 was the first phone to feature the retina display. It has a PPI rating of 326 pixels per square inch, with a total resolution of 960×640. Steve Jobs, the late founder and CEO of Apple once suggested that the “magic number” for PPI to achieve a retina display was 300. The appearance of a retina display is entirely dependent upon the person’s eye distance from the display. If the eyes are further away there will be less pixilation, but when the eyes are close to the display some people are able to pick out the individual pixels. When any type of Apple device incorporates a Retina display, each widget and other icon on the screen is doubled in width and size to compensate for the smaller size of the pixels. 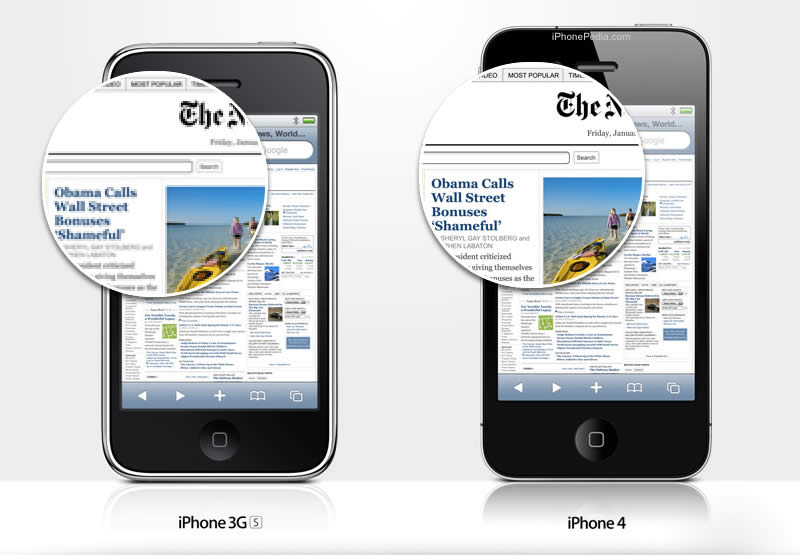 Apple currently has the retina display incorporated into the following 4 devices:

Each device features different resolution and PPI ratings than the other devices. In a typical retina display the PPI rating will decrease as the screen size increases. For example on the MacBook Pro with a 15” screen the PPI rating is 220, while on the iPhone 5 with a 4 inch screen the rating is 326. Larger screens will also have larger resolutions as well, with the 15” MacBook Pro featuring an astounding 2880×1800 resolution. The screens for the retina display are produced by both Samsung and LG.