Will the iPod Disappear?

In 2001, Apple released its first iPod, making digital music accessible for the first time to millions of people in a realistic and streamlined way. Digital files had obviously been around for some time, but Apple was the first to capitalize on this and make a quality device capable of storing and playing thousands of songs. The release of the iPod dramatically changed the music industry in a variety of ways. Media giants like Borders and Best Buy, longs purveyors of large music selections, were forced to go in different directions or were driven out of business entirely. 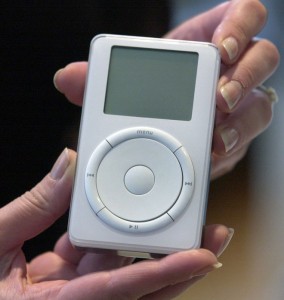 But technology seems to advance at a rate far too rapid to comprehend. What was fresh and revolutionary only 12 years ago, a mere blink in terms of the history of the earth, could already be on the way out. Depending on the study you view, it is estimated that somewhere between 56 percent and 61 percent of Americans now use smartphones. For most smartphone users, an iPod is not much of a necessity. Many people who have iPhones are able to sync their music just as easily onto their phones as they previously could onto their iPods, and of course all of the major features that iPods offer are available on iPhones. Additionally, music apps like Pandora and Spotify are making it even easier to stream music, and of course the cell phone is a much better Internet tool than the iPod. Even the flashier iPod touch has very few of the capabilities that the iPhone has.

Apple is of course trying to keep the iPod a relevant product. Newer models like the iPod touch, which looks strikingly like an iPhone, and enhancements to the device’s capabilities have kept the iPod from being totally irrelevant. In fact, new versions of the iPod touch actually include video and camera functions, capabilities that had previously only been available on phones. The price tag may be the only thing keeping the iPod touch around for now: for people without a smartphone, it is still a viable option for music, and is much more affordable than springing for a new phone.

This, too, may be changing soon. Previously, in order to get an iPhone users had to sign up for long-term contracts with AT&T or Verizon, but since smaller carriers like T-Mobile and Sprint are now offering smartphone plans with no contract and no data rates, smartphone usage will only continue to rise. It may not be long before the device the changed the game forever is itself benched and retired.